Nei Ja
POLAR PIONEER: Karin Strand is a true polar pioneer. At the age of 48, she has completed more than 140 expeditions to Antarctica, making her one of the most experienced explorers in adventure travel. Foto: STEFAN DALL/Hurtigruten

The naming is set to take place November 8th, during MS Roald Amundsen’s maiden voyage to the white continent. She will be the first ship in history to be named in Antarctica.

- I am honored to be named godmother to the most innovative ship to hit the waters in decades. The green technology and innovative solutions serves as an inspiration for exploring our oceans in a more sustainable way, MS Roald Amundsen godmother Karin Strand says.

As the ship she will be naming, Strand is a true polar pioneer. At the age of 48, she has completed more than 140 expeditions to Antarctica, making her one of the most experienced explorers in adventure travel.

According to Hurtigruten CEO Daniel Skjeldam, Strand was a natural choice as godmother to the groundbreaking expedition cruise ship.

- As the polar hero Roald Amundsen, our MS Roald Amundsen is something out of the ordinary. And so should our godmother be, Skjeldam says. 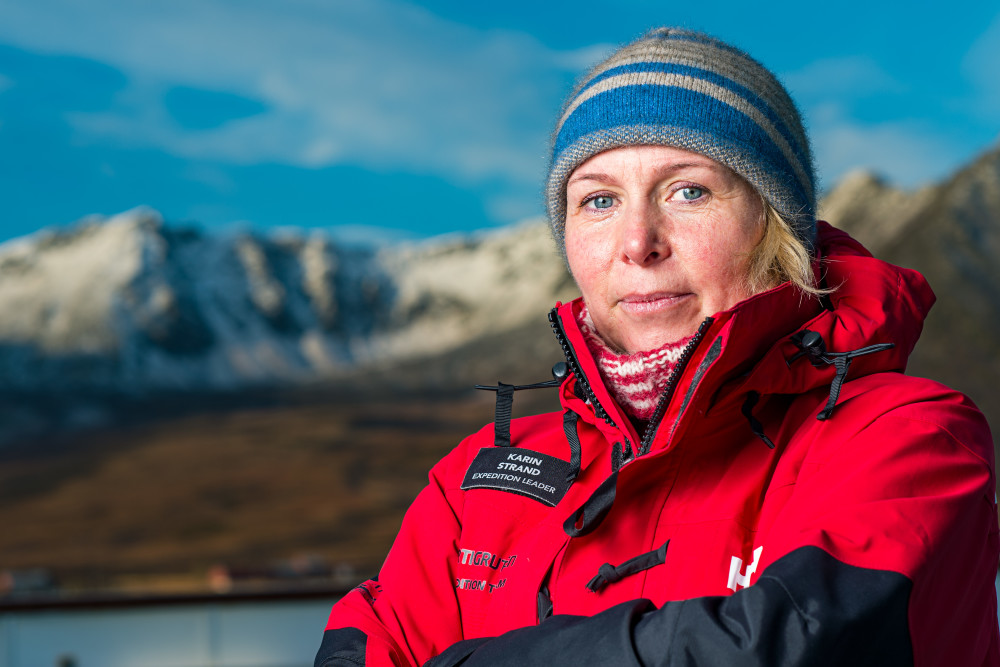 POLAR FEVER: For over 20 years, Norwegian-born Karin Strand has roamed the Polar Regions south and north throughout the year, both professionally and on her time off. Foto: ØRJAN BERTELSEN/Hurtigruten

- We wanted someone who in her own self represents our core values, the spirit of exploration and the share awesomeness of the ship. Karin is all that, and more. Her passion for exploration, the oceans and the communities we visit, combined with her never-ending will to innovate, makes her a true role model, Skjeldam says.

She grew up among the Norwegian fjords and glaciers in Jølster on Norway’s western coast. After law studies, Karin changed her career plans due to passion of travelling and the oceans and joined Hurtigruten as an expedition leader.

Since then, she has roamed the Polar Regions south and north throughout the year, from Greenland, Svalbard and Antarctica, both professionally and in her time off – as a keen kayaker.

Named in the ice - with ice 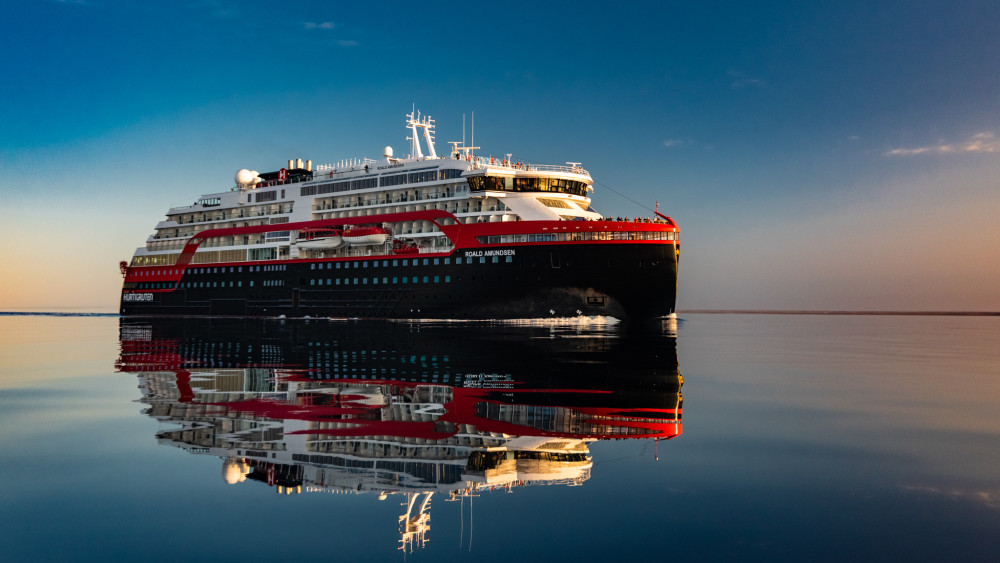 FROM CHAMPAGNE TO ICE: When naming MS Roald Amundsen, the traditional breaking of a champagne bottle will be replaced by a chunk of ice, to honor the legacy of polar hero Roald Amundsen.The naming ceremony will take place en spectacular surroundings in Antarctica in November. Photo: KARSTEN BIDSTRUP/Hurtigruten.

As godmother, she will honor the longstanding maritime tradition of naming and blessing the ship. But there is more than the location that sets the MS Roald Amundsen naming ceremony aside from the ordinary:

Amundsen himself invented the ritual when christening his famed expedition ship “Maud” in 1917, with crushing a chunk of ice against her bow.

Named after the polar hero, Hurtigruten’s hybrid powered MS Roald Amundsen made maritime history by being first cruise ship in the world to sail purely on battery power.

This month, MS Roald Amundsen became the first hybrid powered ship to complete the famed Northwest Passage – following in the wake of Roald Amundsen’s 1903-1906 expedition from Greenland to Alaska.

Specially designed for exploring some of the most spectacular waters of the planet, MS Roald Amundsen features groundbreaking green technology, such as large battery packs to support her low-emission engines. This will reduce CO2 emissions with more than 20 % compared to other cruise ships of the same size.

FOR MEDIA: More photos of polar pioneer Karin Strand can be found here - in the Antarctia Ship Naming folder:
http://bit.ly/ms-roaldamundsen

Conserving Resident Killer Whales in the Pacific, securing recreational areas for local communities and encouraging local cultural activities – these are the latest projects to receive funding from Hurtigruten Foundation.